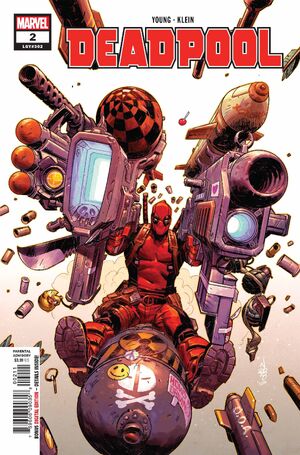 Aaaaaaaah! I get it. Plausible deniability. The Avengers are not hiring me to kill anyone or anything. Wink, wink, am I right?

• A strange and powerful being from outer space is coming to destroy Earth – but WHY?

• WHO CARES?! Deadpool is totally going to merc it dead! Take that, space nerd!

• Ummm, that’s the right thing to do, right? And… Wade can do it? Right? And there totally won’t be any repercussions, right? RIGHT? I, uh…I’ve got a lot riding on this…

Retrieved from "https://heykidscomics.fandom.com/wiki/Deadpool_Vol_7_2?oldid=1661127"
Community content is available under CC-BY-SA unless otherwise noted.