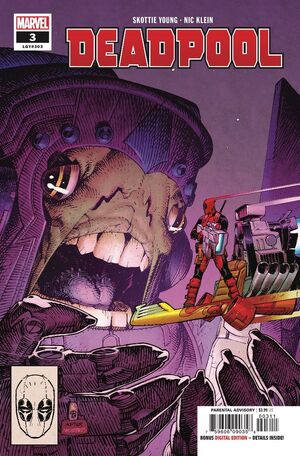 "But despite all of our super-powers, armor, shields, and other various knick-knacks, the only person on Earth who could stop the mega-puke-o-tron was Deadpool. Which is why we hired him to straight up kill Earth's biggest threat. Five stars. Would merc again."

THE BATTLE FOR PLANET EARTH!

• Deadpool’s got a plan, and those usually work out flawlessly, so everyone, don’t worry! Earth is TOTALLY GOING TO BE FINE.

• But, uh, just in case, anyone have an extra spaceship or a teleporter or some interstellar conveyance? I’m sure Deadpool’s got it in hand, just, you know, better safe than sorry…

Retrieved from "https://heykidscomics.fandom.com/wiki/Deadpool_Vol_7_3?oldid=1661169"
Community content is available under CC-BY-SA unless otherwise noted.