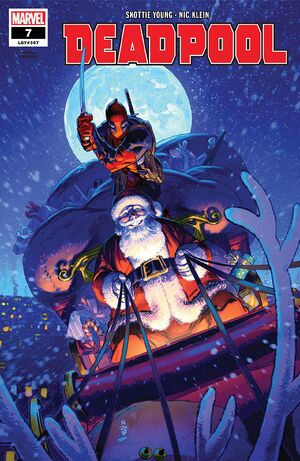 I know you're feeling hurt right now, and I can't really explain why none of you got any Christmas gifts this year, but all I can tell you is... yes. I will kill Santa Claus!

• Deadpool gets his most difficult mission yet…TAKE OUT SANTA CLAUS!

• The best Christmas story since Die Hard! YOU HEARD US!!!

Retrieved from "https://heykidscomics.fandom.com/wiki/Deadpool_Vol_7_7?oldid=1654713"
Community content is available under CC-BY-SA unless otherwise noted.