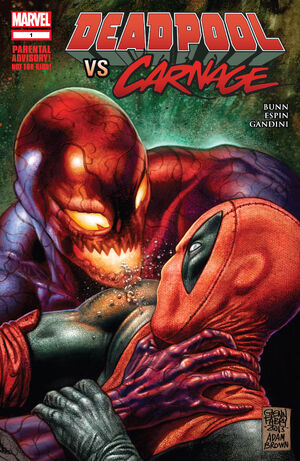 A state trooper was complaining about Carnage while eating, oblivious to the fact that he was sitting next to him. Carnage kills him and his friends, and later everyone in the restaurant. Deadpool sees this on the news and accidentally perceives that the lines from the channels he switched to was a sign from the world. (The message was: "The killer is not acting randomly as he believes! Ride the wave of insanity and you can be the first to find him boy!")

Deadpool uses his insanity to luckily find Cletus at the outside of Tulsa. Carnage starts talking to himself about what happened over the past moths when suddenly, Wade attacks!

After a short but suspenseful battle. Deadpool defeats Cletus with a grenade in the mouth. Before he kills Carnage however, Shreik incinerates Deadpools face and rescues Carnage.

• That’s right—good crazy vs. bad crazy, once and for all!

• And you can bet it’s gonna be a bloody one!

Retrieved from "https://heykidscomics.fandom.com/wiki/Deadpool_vs._Carnage_Vol_1_1?oldid=1507141"
Community content is available under CC-BY-SA unless otherwise noted.