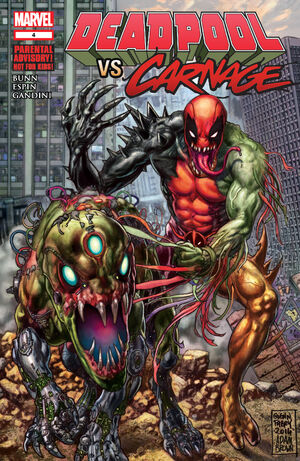 I think what they're trying to say is... If you strike me down... I shall become more powerful than you could possibly imagine. And also... I am your father.

In the Carrington Cottage Psychiatric Hospital, Carnage is lamenting about his insanity and asking the doctors about whether or not chaos and chance even exist, when suddenly he gets shot by Deadpool, who is sniping from a nearby tree. Carnage starts calling him out, and Deadpool attacks with all of the life foundation Symbiotes bonded to him. After scaring Shriek away and making Carnage retreat,Deadpool disguises Shriek as himself, wanting Carnage to destroy the Deadpool decoy. The plan works and Carnage nearly kills Shriek. Then Carnage sits in a unlocked cell waiting to be alone, and swearing vengeance on The Merc with a Mouth. Deadpool sends Lasher to give the symbiotes back to the army, and ponders who will be the next person he cures of insanity.

• Or will Deadpool talk the scarlet sociopath’s ear off?

• Find out in the conclusion to the 2014 Insanity Cup!

Retrieved from "https://heykidscomics.fandom.com/wiki/Deadpool_vs._Carnage_Vol_1_4?oldid=1422953"
Community content is available under CC-BY-SA unless otherwise noted.