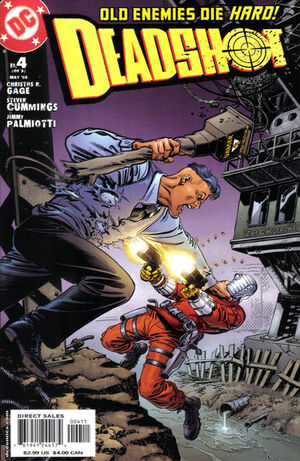 Deadshot and Closer fight. Deadshot finds Closer's weakness, exploits it and defeats him. The mother of Deadshot's daughter appears and helps him home. She tells him if he'll stop killing people, she'll settle down with him. Deadshot walks out. After talking with the local cops and Green Arrow, Deadshot returns home and tells his girlfriend he'd like to give things a try. In the meantime, the local crime organizations have pooled their resources and hired Firebug and an army of metahuman criminals to kill Deadshot.

Retrieved from "https://heykidscomics.fandom.com/wiki/Deadshot_Vol_2_4?oldid=1422299"
Community content is available under CC-BY-SA unless otherwise noted.