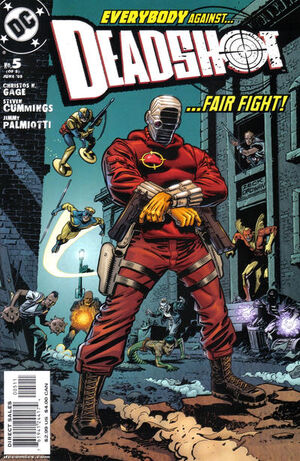 I always thought your wings were fruity. Then I realized they're where you store the accelerant for your flames.

A gang member tells Deadshot he is being targeted for a hit. Deadshot takes his new family to the zoo. There, he tells Michelle that his parents foundation will take care of Zoe's every need, no matter what. Michelle tells Deadshot she loves him. He tells her he loves her. That night, he suits up and goes to confront his hitmen. He kills them all and the warehouse explodes. Everyone believes Deadshot to be dead. He turns up again as a hired gun in the Far East.

Retrieved from "https://heykidscomics.fandom.com/wiki/Deadshot_Vol_2_5?oldid=1422300"
Community content is available under CC-BY-SA unless otherwise noted.