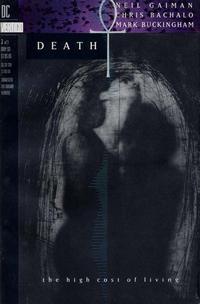 Appearing in "The High Cost of Living"Edit

Synopsis for "The High Cost of Living"Edit

Mad Hettie releases Death and Sexton from the locked room. Death buys a new Anhk from a street vendor with her last ten dollars. She gives two pennies and a Russian doll to Sexton. Death dies. The blind old man demands the two pennies from Sexton and places them on Death's eyes then leaves. Mad Hettie retrieves the Russian doll Sexton had left with a neighbor and removes her heart from inside.

Retrieved from "https://heykidscomics.fandom.com/wiki/Death_The_High_Cost_of_Living_Vol_1_3?oldid=1431752"
Community content is available under CC-BY-SA unless otherwise noted.