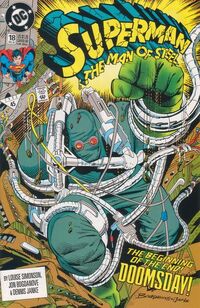 Storyline Aliases
The Death of Superman

Origin
"The Death of the Superman" was a multi-part storyline published in alternating Superman titles from December–January of 1992-1993, and one issue of Justice League America in December, 1992. The story followed events that first took place during the "The Death and Return of Superman" storyline, and was followed-up by the story-arc "Funeral for a Friend" and "Reign of the Supermen!".

The story starts as a green-clothed fist beats its way out of an underground chamber. Once the monster is above ground, it instantly starts to destroy, crushing a bird in its hand and snapping the neck of a deer.

Meanwhile, elsewhere, Superman and Lois are fighting the Underworldere.

As the creature continues its rampage, the Justice League International American branch gets word and zooms to help. The fight between the JLI and the creature starts when the creature throws a log at the Blue Beetle's Bug and destroys it.

The flying members save the non-flying members as the creature destroys a semi-truck. Guy Gardner attacks the creature but is decimated by its overwhelming power, prompting Fire to save him from possible death. Fire's flames are useless against the creature, so Bloodwynd uses all of his power to punch the creature—only to be surprised that it also proves useless. The creature then punches Bloodwynd through a steel silo containing oil at a LexCorps Refinery in Ohio, which explodes with flames as he passes through it. The creature then flings a rock at Fire. Blue Beetle rushes in to rescue Bloodwynd from the flames but is grabbed from behind by the creature. The Creature savagely beats Blue Beetle nearly to death in a matter of seconds, then tosses the mangled hero like a rag doll as Bloodwynd and Maxima begin the next wave of the attack. The creature is so fast that he grabs Bloodwynd by the ankle and hurls him into Maxima, thereby launching both into another oil silo, which also explodes. Blue Beetle finally falls to the ground with Ice, realizing that he needs immediate medical attention.

During an interview by Cat Grant, Superman gets word that the Justice League is being defeated and rushes off to help.

Maxima levitates Blue Beetle to safety as Ice starts back into the fight.

A boy named Mitch Anderson arrives home from school, dreading the welcome back home from school speech from his mother Claire Anderson. Mitch gets into an argument with his mother over his infant sister Becky getting all of the attention and that he blames his mother for his father deserting them. As Claire begins to cry over the hurtful words, Ice is thrown through their kitchen window. When they look outside they see the creature destroying their family car. Superman arrives (with Booster Gold in tow) and the fight between the two titans begins.

The creature first hits Superman, and when it has no effect on the Man of Steel, it then kicks Superman through the Anderson home, which then collapses on the family inside. The creature grabs Booster and slams him into a tree, knocking him out. The creature crashes through the rubble, and as he is about to attack Claire Anderson and her daughter Becky, Superman crashes through, knocking the creature off balance. Booster, Fire, Guy and Bloodwynd all let loose with their powers in conjunction with Superman's heat vision as Claire pulls Ice to safety. The creature is unharmed as Fire blacks out from fatigue, Booster's power cells deplete, the creature bursts free of the attack, plowing through the heroes. 004 The creature once again takes hold of Booster, beating him to the brink of death before tossing him into Guy. As Superman and Bloodwynd come from behind to attack, the creature responds first by knocking both of them down. The Anderson home explodes into flames, trapping the family, and then the creature leaps into the air with Superman in pursuit. Mitch cries out for Superman to help, but Superman is obligated to concern himself for the many instead of the few, at least for the moment. Since the creature cannot fly, Superman catches him in midair and hits him hard. Mitch is still screaming for help when Superman looks in his direction, only to be blind-sided by the creature. Superman, realizing that the creature cannot fly, plunges the creature deep into the ground to give him time to rescue the Andersons. Superman swoops in and rescues Claire and Becky from the blazing rubble that was the Anderson home. He drops them off with emergency services, who also has much of the League also in their emergency vehicles. Superman takes off once again as the creature also frees itself and leaps into an AH-64 Apache helicopter nearby. The attack helicopter destroyed, Superman rescues the crew from the long drop down. The creature lands on a police cruiser with Superman pile driving the creature into the ground right afterward. The fight becomes a brawl as the two titans crash through the police station nearby. Superman punches his way free enough that another AH-64 opens fire on the creature from above. But the creature is unfazed by the onslaught and grabs a light post and spears the Apache. Once again Superman rescues the crew of a destroyed helicopter as Maxima gets back into the fight with a surprise punch at the creature.

At the Galaxy Building, Lois, with the help of Cat Grant, is trying to get Jimmy to come with her to cover the fight between Superman and the creature.

And at Lex Tower "Lex Luthor II" convinces Supergirl to right now stay out of the fight.

The creature comes across an overpass and destroys it along with another semi that was passing over on the overpass. It then grabs a car and throws it hundreds of feet into the air, with Superman catching it. At this point the creature wanders into a department store, where he hears a TV commercial in which he hears the word "Metropolis" as Superman once again engages the creature in combat.

The fight is now being broadcast nation wide and even Lois and Jimmy are following in the Daily Planet helicopter covering the fight for the paper.

In Metropolis, Lex is telling Supergirl that with Superman away she is needed to protect Metropolis.

The fight is now at a burger joint 60 miles from Metropolis and Superman realizes that as fast as the creature moves, 60 miles is not very far away at all. So Superman grabs the creature and tosses him miles away into a nearby mountain, which turns out to be where the Cadmus Project is located. The fight shakes the project below as the tree city is destroyed in the fight. During the fight, the tree city collapses on the two of them just as Guardian arrives on the scene. The creature frees itself, toppling the trees onto Superman and Guardian. The creature leaps off again and lands on a road sign indicating that Metropolis is now 50 miles from where it takes its next leap.

In Smallville, Jonathan and Martha are worried about their son.

As Superman frees himself from under the girders, it is now obvious the fight is actually taking a toll on him, as he is rarely injured but is now bleeding.

The creature lands into the middle of a Sci-Fi Convention and quickly starts killing people. But Superman arrives again and puts the creature into a hold and launches back up into the air, but while flying upward the creature's foot catches on a gas line and cracks it with a resulting explosion of the convention center itself. An explosion so powerful it causes a shockwave through the air that nearly cause news helicopters to collide into each other.

The shockwave is felt in Lex Tower while Lex is holding a press conference and it prompts Supergirl to enter the fight.

High in the sky the creature plunges his bony extremities into Superman's side, releasing himself from the Man of Steel's hold. The creature than reaches around and tosses the bloodied Kryptonian toward the ground just as Supergirl enters the fight.

Below Bibbo and Professor Hamilton are aiming a powerful cannon at the creature.

The crash causes yet another gas line to rupture causing an explosion near an orphanage which Superman takes on the brunt of the explosion to prevent injury to others.

In the street where the creature is the Metropolis Special Crimes Unit, led by Maggie Sawyer and Dan Turpin, open fire on the creature. But the creature grabs Turpin and tosses him but he is caught by Superman. Superman then plows into the creature and finally draws blood of his own. The two of the them continue to fight like two boxers at the end of a long fight: exhausted and drawing each other's blood. From above, the armored members of Team Lex get into the fight by firing their weapons at the creature and at Superman. As the battle continues the creature grabs Superman and tosses him into the nearby Daily Planet helicopter with Lois and Jimmy aboard. Superman safely brings the helicopter to the ground as the creature grabs another news helicopter. After Superman and Lois share a brief kiss, Superman launches back into the fight. The creature slams Superman into the ground. As the creature heads toward Lois and Jimmy, Superman comes up from under the ground, hurting the behemoth, and then lets lose with full heat vision. The creatures bony weapons dig into steel like flesh as the two brawl like street fighters in front of the Daily Planet. They climax with final fatal blows. Superman lies unconscious as his torn cape flaps in the wind around debris like a flag.

This story is featured in the novel Death and Return of Superman, written by Roger Stern. For the most part, the novel is fairly accurate to the storyline, though it had a number of changes to it. Amongst those were writing out the involvement of the Underworlders, giving Claire Anderson a slightly more proactive role (standing up to Doomsday when it barreled into her house) and putting in the involvement of John Henry Irons that was mentioned in his first full appearance.

Retrieved from "https://heykidscomics.fandom.com/wiki/Death_of_Superman?oldid=1550620"
Community content is available under CC-BY-SA unless otherwise noted.