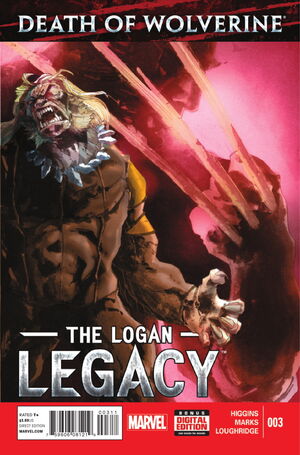 Maybe you were right, Haji. Maybe there's somethin' to a better class 'a kills. Maybe I won't be here for that long. Maybe... I can do better than Logan.

• With Logan now gone forever, who will stop Sabretooth from finally annihilating everyone and everything in his path?

• Fighting Wolverine was his greatest thrill on the planet… the ultimate sport… but now that Logan is dead, Sabretooth’s rage takes on an entirely new shape and mission -- unencumbered and unrestrained.

Retrieved from "https://heykidscomics.fandom.com/wiki/Death_of_Wolverine:_The_Logan_Legacy_Vol_1_3?oldid=1421771"
Community content is available under CC-BY-SA unless otherwise noted.