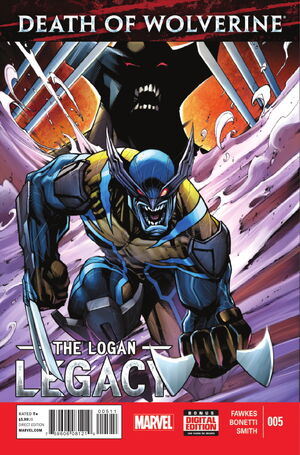 Ladies and gentlemen. Ladies and gentlemen! You can't leave just yet. The security here is very good. Every exit is sealed... Except this hole in the concrete behind me. I have something I'd like to say. Please do me the courtesy of listening. These artifacts are my father's remains. My father's. I know you want what's let of him. To study, or to put to other uses. To worship. To revile. To revive. I don't care which. You shall not have them. You have no right to them. From this moment foward, let it be known-- Anyone who makes any move... any move at all, with intent to buy, sell, trade, or replicate any piece of the Wolverine...that person will die unfulfilled. Painfully. Suddenly. By my hand. On my honor. Three of you will live to deliver this message. The rest will be my demonstration.

• The man known as WOLVERINE is dead. But what about the sum total of his mortal remains? Relics? Trophies? Or is there something more remaining of Logan…something which endures? Something in his son, Daken?

• Daken hated his father while he lived. But now, the duties he takes on in Logan’s name will surprise everyone who knows them both…

Retrieved from "https://heykidscomics.fandom.com/wiki/Death_of_Wolverine:_The_Logan_Legacy_Vol_1_5?oldid=1538034"
Community content is available under CC-BY-SA unless otherwise noted.