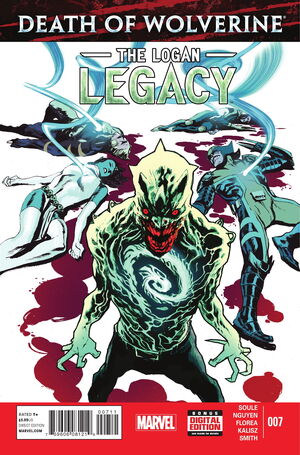 • It’s all come to this! The heroes and villains closest to Wolverine—Mystique, Daken, Sabretooth, X-23 and Lady Deathstrike—make a monumental decision that will forever alter the Legacy that Logan built years forging.

• That is, if they survive the threat of the vampiric menace challenging their goals!

• According to artist Peter Nguyen, notes left for the colorists stated that Elixir was supposed to return to his gold form while under attack by Siphon. For some reason, however, this was missed or disregarded, and Josh remained in his black form throughout the attack. He has declined to either confirm or deny whether Josh was killed.

Retrieved from "https://heykidscomics.fandom.com/wiki/Death_of_Wolverine:_The_Logan_Legacy_Vol_1_7?oldid=1421775"
Community content is available under CC-BY-SA unless otherwise noted.