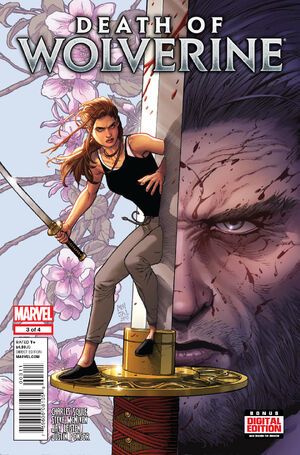 • hara-kiri (noun) Also called "seppuku". ceremonial suicide by ripping open the abdomen with a dagger or knife; formerly practiced in Japan by members of the warrior class when disgraced or sentenced to death. • Suicide or any suicidal action; a self-destructive act: http://dictionary.reference.com/browse/hara-kiri

Retrieved from "https://heykidscomics.fandom.com/wiki/Death_of_Wolverine_Vol_1_3?oldid=1658683"
Community content is available under CC-BY-SA unless otherwise noted.