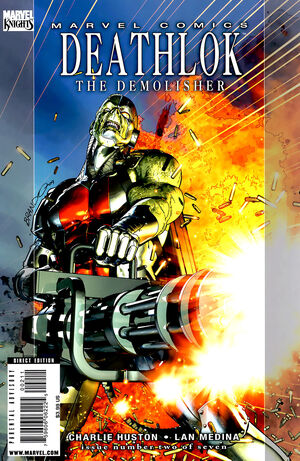 Appearing in "Flesh and Blood Soldiers"Edit

Marvel’s ultimate cyborg is back in this 7-issue Marvel Knights limited series written by Charlie Huston (MOON KNIGHT) and breathtakingly illustrated by Lan Medina (FOOLKILLER). In the not-too-distant future, war is a spectator sport and warriors die hard and live fast! So when telegenic warrior Lieutenant Mike Travers hotdogs it on the battlefield and gets himself and his C.O., Luther Manning, blown to bits, it looks like the ratings are about to take a hit, right? Wrong. Through the miracle of science, RoXXon Corp is proud to bring you tomorrow’s Super Soldier today, the unprecedented feat of military technology called Deathlok the Demolisher!

Retrieved from "https://heykidscomics.fandom.com/wiki/Deathlok_Vol_4_2?oldid=1421366"
Community content is available under CC-BY-SA unless otherwise noted.