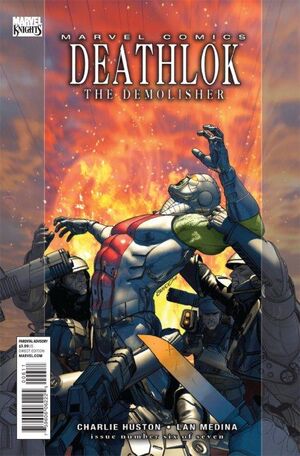 “RESIDUAL HUMANITY” RoXXon Corp is about to learn the cost of its sizzling ratings. Deathlok has cut a bloody swath right to Director Devereoux’s doorstep, and is ready to deliver the killing stroke. But wait -- there’s hesitation. Something lurks within the Alpha Mech’s prototype, a glitch in the circuits, fibers and dead tissue that Roxxon Corp never could have predicted. It has a million-dollar question for Devereoux, and she’d better consider her answer carefully.

Retrieved from "https://heykidscomics.fandom.com/wiki/Deathlok_Vol_4_6?oldid=1421370"
Community content is available under CC-BY-SA unless otherwise noted.