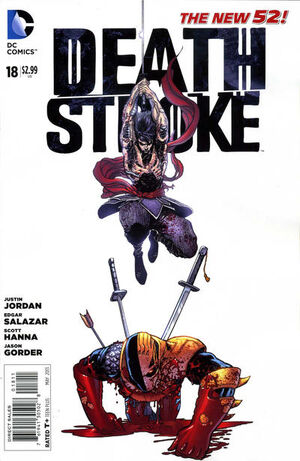 You only see the negatives of honor. Your father would have had the clan backing him up. And he would have been willing to die to kill me. That, at least, is something we both appreciate.

Appearing in "Fight the Future"Edit

Synopsis for "Fight the Future"Edit

Deathstroke watches as Tomo of the Sukesada Clan runs his own father through with his sword, musing that he has already learned the hard way what happens when you train your children to become weapons. From the floor, he hears the elder Sukesada offer him one dollar to avenge his death, and without hesitation, Deathstroke accepts.

This contract may be harder than he expected, though, because Tomo has equipped himself with cybernetic enhancements, and manages to slice Deathstroke's own sword in half with his. Without much fight, Tomo manages to pin him, and thrust his sword through his chest. Gleefully, Tomo rejects the tradition of asking for last words, but Deathstroke responds anyway that Tomo has forgotten that the original contract to kill the person who killed Jenner Collings is on him. As such, the Sukesada Clan is bound to take their new leader down.

While Tomo is distracted, Deathstroke recovers and forces Tomo out the window, holding on to an anchor line for his own life. Unfortunately, Tomo has somehow gained the ability to adhere to the glass of the building's window, and begins walking back up the wall toward him. As he cuts the rope, Deathstroke leaps around him and lands on him, using Tomo to keep from falling further.

Clinging to Tomo, Deathstroke explains that Sakesada's sense of honour would have had him let himself die in order to kill his target. Unlike Tomo, that is a quality that Deathstroke shares with the dead man. He kicks the window out from under his feet, shattering it, and leaving neither of them with any purchase on the wall. Together, they crash to the ground, with Tomo taking the brunt of the fall.

From his crater nearby, Tomo wheezes that John Lynch lied. Deathstroke can't get anymore out of him, but he now knows where Tomo got his enhancements from. The only problem is that Lynch is supposed to be dead already.

Despite being billed as having the Teen Titans and the Ravagers, neither teams make an appearance.

Retrieved from "https://heykidscomics.fandom.com/wiki/Deathstroke_Vol_2_18?oldid=1422334"
Community content is available under CC-BY-SA unless otherwise noted.