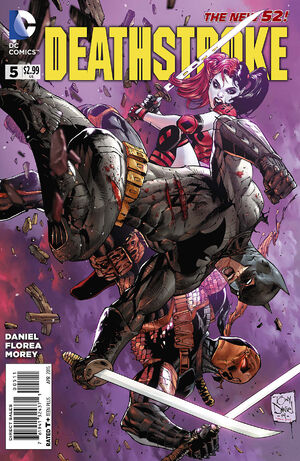 If anything happens to my son, Batman -- I'm holding you responsible!

As revenge for betraying the Suicide Squad to the Russians, Harley Quinn has double-crossed Deathstroke, luring him into a fight with the Batman. Slade is impressed by his opponent's skill, and ability to match his brutality. He knows, though, that his advantage lies in the fact that he is willing to kill, while Batman is not. Still, his inexperience fighting with two eyes, puts him at a disadvantage, and frustrated, he warns Batman that he will hold him responsible if anything happens to his son, Jericho. Hearing this, Batman relents, realizing that he might have been duped by Harley as well. She offhandedly explains that Slade's son is in Gotham and in big trouble - but she doesn't care. They should kick each other's asses. Slade uses Batman's hesitation to overpower him with a cheap-shot, but when he nearly gets an opportunity to make a killing blow, Harley brings her mallet down on his head. While he and Batman resume their Battle, Harley decides to take her leave, admitting that there is a bounty on Jericho's head that she intends to collect, and leaving them with several bombs, which soon go off and catch both men in their blast.

Of course, Harley can't bear to just leave without checking to make sure they're dead, so she is surprised when Slade reaches up from the rubble and grabs her aroudn the throat. He demands to know where his son is being kept. She explains with annoyance that his daughter Rose has been working for the Penguin, taking down his enemies to make ends meet. Jericho is with her. She promises to take Slade to check the Penguin's safe-houses in exchange for her life.

Meanwhile, on the pier at Gotham Harbor, Jericho warns his sister that he shouldn't have come to the city. He can't even control the power he has, and he worries he might accidentally kill Rose with it. She promises that he has never been able to tap into her mind - it's part of their blood relationship as family. Hopefully they can find a way to put a leash on the power that their grandfather awakened in him. She explains that the man she's brought him to is a friend of their father's who claims to know how to control the power. Jericho doesn't trust their father, though, reminding that no man should have the power of life and death over another.

The man in question is Possum - the same man that Slade had been contracted to kill when he first arrived in Russia, though he claims now to be Slade's friend. Jericho warns Rose that he can sense the evil on this man, and Rose - who trusts her brother's intuition - suggests that they call the meeting off. Possum warns that they can't do that, activating a sound on his phone that affects Jericho's powers, rendering him immobile. Angrily, Rose cuts Possum to pieces. As she rushes to her brother's side, she is surprised when her grandfather appears, assuring her that Jericho can't hurt anyone anymore - least of all himself.

Retrieved from "https://heykidscomics.fandom.com/wiki/Deathstroke_Vol_3_5?oldid=1422341"
Community content is available under CC-BY-SA unless otherwise noted.