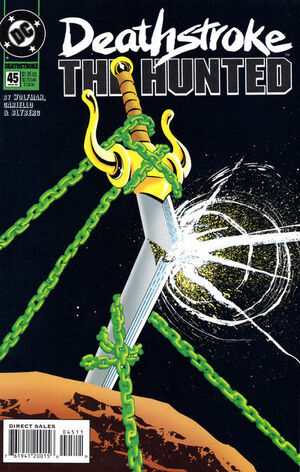 The government wants the truth. I want the truth. And one way or another, we're all going to get it.

Appearing in "Deathstroke the Hunted (Part VI of VI): The Road to Salvation... First Goes Through Hell!"Edit

Synopsis for "Deathstroke the Hunted (Part VI of VI): The Road to Salvation... First Goes Through Hell!"Edit

Darkstar chases Deathstroke and corrals him into a conflict with the rest of the New Titans. Exhaustion finally gets the better of him, and Green Lantern manages to capture him with his power ring. Meanwhile, Rose Wilson escapes from Ravager just as Wintergreen and Sweet Lili arrive to rescue her. Lili tries to run Ravager down with her jeep, but the vehicle drives off the edge of a cliff and explodes on the ground below. Rose shoots Ravager, sending him falling down the cliff as well, but he survives.

Retrieved from "https://heykidscomics.fandom.com/wiki/Deathstroke_the_Hunted_Vol_1_45?oldid=1684024"
Community content is available under CC-BY-SA unless otherwise noted.