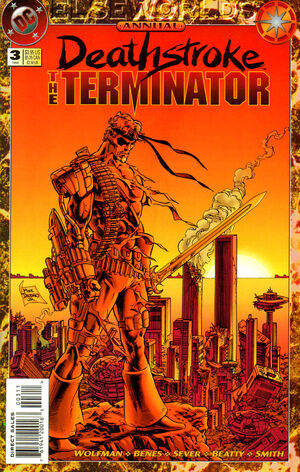 The story begins with Deathstroke on the hunt for Genetix. at the end of the last century, man created the Genetix, who in gratitude annihilated most of the human race. The earth is now a desolate place, which was plagued with acid rains early in the century and magnetic storms have erased all data on microchips. Slade finds a pack of Genetix in the now-ruined Library of Congress in Washington, D.C. He kills a dozen, but hundreds more take their place and he is eventually overrun. Deathstroke is paraded through the streets and tortured by the Genetix population. They finally bring him to the ruins of the White House where they burn him alive.

The Genetix take Deathstroke's charred body and dump it in what was once the Arlington cemetery, on top of a pile of dead human resisters. Time passes and the pile of corpses grows as Slade starts to heal from his wounds. He gathers his equipment and costume and makes his way to the ruins of the Pentagon. Slade discovers a bio-wafer (the only kind of information storage device that still works) and on it discovers a report from Wintergreen that reveals that the mutants were developed from the same serum that gave Deathstroke his superhuman abilities.

Slade visits Wintergreen's grave and makes a promise to him: That he will give a helping hand to the remaining humans before he dies. He is ambushed by a gang of mutants, Slade dispatches them quickly and puts the remains in a bag, which he carries to Georgetown, hoping to discard them in a nuclear power plant under Washington D.C. However Slade finds to his surprise a large colony of humans living in a sophisticated city underground.

The Humans are suspicious of Deathstroke, but he calms them and convinces the humans that he will help them overthrow the mutant empire. He plans to destroy the Genetix Communications Centrex, which is where they create their weaponry. If the humans can destroy the plant, they will cripple their oppressors. The Genetix computers quickly detect the five thousand humans that Slade leads. The mutants amass and prepare to wipe out the humans. AS the humans and the Genetix clash, but despite the odds Slade and his army win the vicious battle.

The remaining army marches towards the only bridge towards the rest of civilization, only to find it destroyed by the mutants. Deathstroke reassures the humans who have lost faith in their new leader and they collectively create a makeshift way to cross the river. Slade tells the humans he will rendezvous with them in Tennessee in a week, but he instead sets the nuclear missiles under Washington to detonate, which would destroy the remaining Genetix and kill him. On his way out, Deathstroke finds a small child who was left behind. Renouncing his wish to die in peace and instead choosing to save the child, Deathstroke runs outside of the blast zone.

With no weaponry left, the remaining Genetix and the humans learned to set aside their differences and worked together to build a new world.

Retrieved from "https://heykidscomics.fandom.com/wiki/Deathstroke_the_Terminator_Annual_Vol_1_3?oldid=1422530"
Community content is available under CC-BY-SA unless otherwise noted.