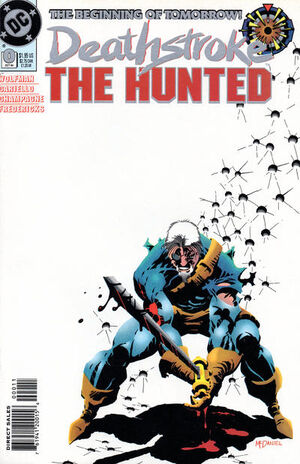 Appearing in "The Hunted, Prologue"Edit

Synopsis for "The Hunted, Prologue"Edit

Deathstroke is on the run from federal agents under the command of Sarge Steel. He is wanted for the murder of Senator Williams and the attempted murder of President Bill Clinton. Slade takes refuge at the brothel run by his former lover Lillian Worth. One of Lillian's girls, Marly, knows the truth about Senator Williams. She tells Slade that she was with the Senator at his beach house when he was gunned down by a costumed maniac. Slade already knows that the Senator was replaced with an assassin who was going to use a suicide bomb to kill the President, but he has no way of proving this.

Slade is later captured by federal agents. He tries to plead his case, but he knows that these men are looking to use him as a patsy. Deathstroke's allies, Wintergreen and the Vigilante break him out of the holding facility and Deathstroke is on the run once again.

Meanwhile from his secret base in Zandia, the Crimelord continues to scheme against Deathstroke. He blows up the Harlem residence of one of Deathstroke's long-time contacts, Maurice. Maurice dies in the explosion.

Retrieved from "https://heykidscomics.fandom.com/wiki/Deathstroke_the_Terminator_Vol_1_0?oldid=1422533"
Community content is available under CC-BY-SA unless otherwise noted.