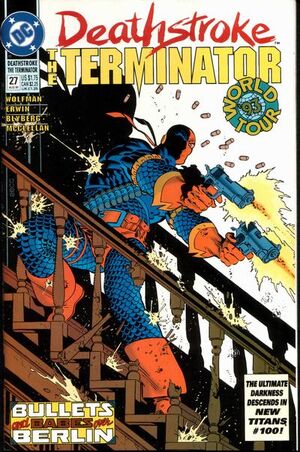 Adeline Kane is kidnapped mysteriously, along with pieces of a cryptic archaelogical treasure map carved in armor, long forgotten since the days of her ancestor M. Josiah Kane. Herr Waller contacts both Deathstroke and Wintergreen, hiring them to find her abductors and rescue her. Traveling to Kane Manor, Deathstroke is just in time to find and interfere with a raid being led by mercenaries against Searchers, Inc.. Although he neutralizes most of their forces, he is distracted when the lead mercenary pulls a gun on one of his younger soldiers, playing on Deathstroke's psychological weakness over his dead sons. Slade is shot, and the mercenaries escape with their intended computer files. Chen is also killed in the skirmish. Based off of the computer files the mercenaries are looking at, the group is able to determine which artifacts they're searching for. Pieces of a suit of armor with a map drawn into it, given to each of Josiah Kane's sons after his death. He vows to find each and every piece of the map before the mercenaries can.

Retrieved from "https://heykidscomics.fandom.com/wiki/Deathstroke_the_Terminator_Vol_1_27?oldid=1422560"
Community content is available under CC-BY-SA unless otherwise noted.