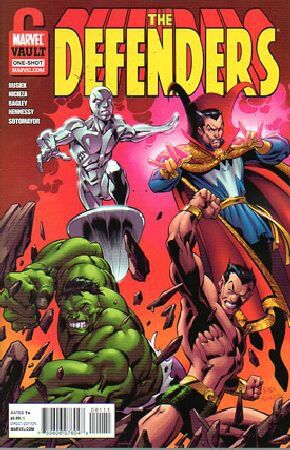 Lucky. We were indeed lucky, this night. And Ramona Fischer -- wherever you are, whoever you are -- I have felt the depth of your young man's regard for you. I do not know whether you will reciprocate, once you know of it. But I hope that you will treasure it. For tonight...it was enough to save a world.

A Marvel Masterpiece from deep inside the treasure vaults can now be told! The original team of Doctor Strange, The Hulk, Silver Surfer and Namor are together again for a hidden adventure! But why was this tale lost? What happens in other dimensions stays in other dimensions, so what unspeakable secrets of the The Defenders are to be revealed? Find out at last in these pages with the illustrious words of Kurt Busiek (THE DEFENDERS, MARVELS) and the incomparable artwork of artist Mark Bagley (ULTIMATE SPIDER-MAN)!

Retrieved from "https://heykidscomics.fandom.com/wiki/Defenders:_From_the_Marvel_Vault_Vol_1_1?oldid=1423004"
Community content is available under CC-BY-SA unless otherwise noted.