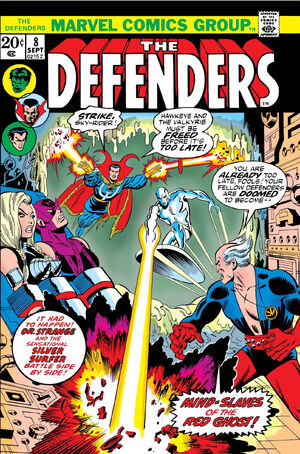 Appearing in "...If Atlantis Should Fall!"Edit

Synopsis for "...If Atlantis Should Fall!"Edit

Synopsis for "Chapter One: Deception!!"Edit

After their battle against Attuma and the Red Ghost, the Defenders have all gathered in Dr. Strange's Sanctum Sanctorum . There gathered around the statue of the Black Knight, Dr. Strange informs them that he has found the means to contact their imprisoned friend. Using his mystic powers he sends a message out to the Knight asking him if he is aware of anything that may set him free from his vantage point. The message goes to the Knight in an otherworldly plain of existence. The knight responds by sending a message back that he has no knowledge on how to get home, but that he is trapped in a timeless realm and is not suffering. This message is intercepted by Loki and Dormammu (Who teamed up in Avengers #115) and use their combined magic abilities to change the message. When the Defenders actually receive it, it tells them that the only way to free the Black Knight from the realm he is trapped in is to recover the Evil Eye. Although the Defenders believe that it was destroyed, they decide to seek it out in the hopes that it may still exist. This story continues in Avengers #116....