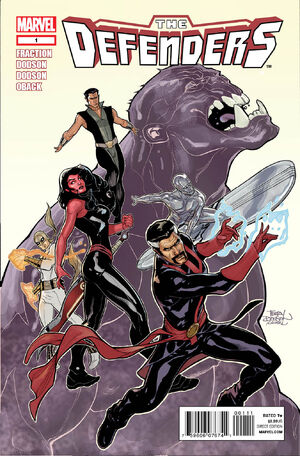 Appearing in "Breaker of Worlds Part 1: I Hate Myself and Want to Die"Edit

Synopsis for "Breaker of Worlds Part 1: I Hate Myself and Want to Die"Edit

In Bucharest, Romania, a string of bizarre, improbable, or impossible occurrences marks the path of Nul, Breaker of Worlds, released from his hammer after the Hulk destroyed it. An unnamed narrator explains that "the membrane that protects us all from impossible nightmares is thin and fragile. All it takes is one thing to rupture it and the entire world can break..."

In New York City, Doctor Strange is feeling slightly lovelorn after an uncharacteristic one-night stand. He looks for clues in the metaphorical tea leaves but finds only the message "R.A.G.E." The following evening, Hulk pushes past Wong into the Sanctum Sanctorum asking for help: he needs Strange to gather their old Defenders teammates and stop Nul from walking the earth. Though Strange is pondering a mystery of his own -- the odd images he saw in the vision of Notebook Joe -- he agrees.

They first contact Namor, then Silver Surfer. Hulk refuses to go any further, saying he doesn't dare go near Nul, but suggests his ex-wife Betty (the Red She-Hulk) if they want some extra muscle. Betty, whom they discover bored and frustrated in Pamplona, Spain, is willing to come along, provided she can bring her "big-ass sword."

Needing transportation, they call on Daniel Rand, aka Iron Fist, whose own life had taken a turn for the interesting when an assassin attacked him during tests of a zero-g plane. Nul's pattern of destruction shows him to be en route to Wundagore Mountain ("a place of weird science and astonishing tales"). As the Defenders follow his trail, Rand's very expensive new plane is brought down by a missile, leaving them stranded but mostly unharmed--

--until Iron Fist is shot. The rest of the team look up to see the menacing figure of Prester John, brandishing the Evil Eye and vowing that the Defenders will not be permitted to interfere. With him is a small army of his New Men -- animal-headed soldiers -- who have the heroes completely surrounded.

• Matt Fraction (FEAR ITSELF, THE MIGHTY THOR, INVINCIBLE IRON MAN) reteams with TERRY DODSON (UNCANNY X-MEN, SENSATIONAL SPIDER-MAN)! • Everyone's favorite Marvel characters banding together to solve a mysterious conspiracy deep at the heart of the Marvel Universe! • The last line of defense against the forces of the unknown!

Retrieved from "https://heykidscomics.fandom.com/wiki/Defenders_Vol_4_1?oldid=1560707"
Community content is available under CC-BY-SA unless otherwise noted.