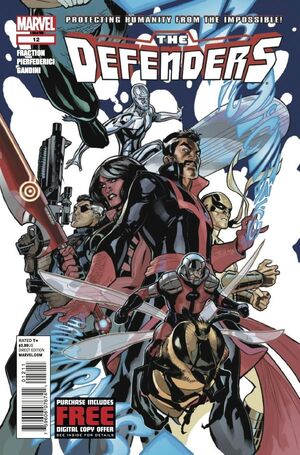 We have to stop us. How can we stop us?

Appearing in "The Impossible End"Edit

Synopsis for "The Impossible End"Edit

Once upon a time, mad gods came to destroy the world. They had grown bored with their reality, and in this profound, soul-deep numbness they decided to render all of reality useless. They entered finite systems and made them more finite. Until one day, they came to a world full of super heroes...

In Dr Strange's home in Greenwich Village, the Silver Surfer shows Dr Strange what he was shown: the Presters Omega, escaping a universe that was destroyed by the Death Celestials. Taking stock, the Presters decided to see if anyone else had managed this feat. Looking across time and space, they found singular marvels that had temporarily held back Armageddon. So they decided to replicate them. Building the Concordance Engines, they bent physics, setting the stage for the fantastic, the amazing, the uncanny, for brave avenging souls and men without fear. They built a world designed to stand against the impossible.

Dr Strange realises that the system was able withstand everything except their efforts to understand it. To give the world a fighting chance, they need to stop themselves. In a flash, Dr Strange vanishes into time to do just that. The other heroes strategize about what to do next: Nick Fury wants to get drunk, Ant-Man wants to use the Concordance Engines to get the surviving civilians to safety, Namor says they need to destroy the engines before the Death Celestials discover them, so that this plan can be tried again elsewhere. They decide to do everything.

Dr Strange lands a month in the past, watches his first meeting with Molly and the subsequent one-night stand. With the benefit of hindsight, he shouts abuse at his younger self for his self-destructive behaviour. The following morning, Dr Strange tails himself into town, thinking about the day ahead: a divination alerting him to the Hulk, the subsequent adventure fighting Nul, Breaker of Worlds, and the discovery of the Concordance Engine which started this whole sad affair. Realising what he must do to avert his future, he changes the outcome of the divination, making his younger self go after Molly.

Returning to the future, Dr Strange hears the news: the Defenders died destroying the Concordance Engines after the civilians got free, and now the Death Celestials are here. Prester Omega finally speaks, wishing him good luck in his next life.

Everything you love dies.

But with the destruction of the universe, paradoxical events are given the space to unfurl. The Hulk came to Dr Strange for help, but without him, the Hulk decided to confront Nul alone. Dr Strange mended fences with Molly and the two parted as friends. Because sometimes a kind gesture is all it takes to save the world.

• All your questions answered! • Everybody dies! Everything ends! So how do the good guys pull it off?

Retrieved from "https://heykidscomics.fandom.com/wiki/Defenders_Vol_4_12?oldid=1421566"
Community content is available under CC-BY-SA unless otherwise noted.