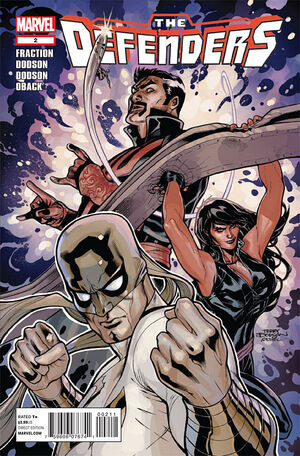 Revelation is at hand. Prepare the Ark for the destruction of the universe...

Appearing in "Breaker of Worlds (Part 2): The Prize of New Avalon"Edit

Synopsis for "Breaker of Worlds (Part 2): The Prize of New Avalon"Edit

Iron Fist lies critically injured on the slopes of Wundagore Mountain. With an effort of will, he uses his chi to force the bullet out and close the wound. Then he joins his fellow Defenders in battle with Prester John and his beast-headed New Men.

The Defenders, though outnumbered, are able to match their adversaries until Prester John turns the Evil Eye on the Silver Surfer, enclosing him in an odd bubble of energy. Under threat of having that same power turned on them, the rest of the Defenders surrender and are taken to New Avalon, a secret city below the mountain.

Elsewhere, Nul is on his way to Wundagore as well, shattering everything in his path.

Locked in a large cage and fitted with custom restraints, the team try to understand the situation. Strange explains that Prester John is not from their time -- he is best known as the leader of a 12th-century colony known as Avalon -- and his sanity is dubious. Red She-Hulk, left largely unrestrained, is able to free them by shrinking to her human size and squeezing through the bars. Though Surfer is still imprisoned in his bubble, the rest of the Defenders quickly bring the battle to the New Men.

Prester John tells his general, Tagar, to kill them quickly, and then approaches Surfer with the Evil Eye. He asks for understanding, claiming that the world is doomed, "warped and sick, infected with violence and hate." The Defenders reach him before he can take the Surfer's life, but with the Evil Eye held to Surfer's head, they have no choice but to halt.

Strange and Namor try to reason with Prester John, saying that Nul is coming and would destroy them all, but John already knows. He tells them Nul is being drawn to the Concordance Engine, and that when he breaks it, he will break the world -- a world John thinks needs breaking because it is "violent, loveless, [and] entirely mad." Prester John plans to bring his faithful aboard an ark: a spaceship that will carry them to a new home in the new universe.

The Concordance Engine, a shining arrangement of pipes that seems to make everything around it less real, is located deep beneath Wundagore Mountain and guarded by a silent, masked knight whom Prester John calls brother. As the Defenders stand before it, Nul arrives and begins to fight his way into New Avalon.

• What is the secret of Wundagore Mountain? • The Defenders vs. the Breaker of Worlds!

Retrieved from "https://heykidscomics.fandom.com/wiki/Defenders_Vol_4_2?oldid=1421556"
Community content is available under CC-BY-SA unless otherwise noted.