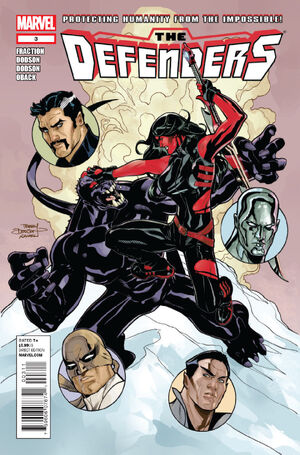 Appearing in "Breaker of Worlds (Part 3): The Man With Ω on His Palms"Edit

Synopsis for "Breaker of Worlds (Part 3): The Man With Ω on His Palms"Edit

The silent, masked guardian of the Concordance Engine watches Prester John, musing that the man has gone mad, as this sentinel has feared going mad. But he who is sworn to guard "the miraculous" Engine will do so at all costs.

As Nul rampages through New Avalon's upper levels, Prester John releases the Silver Surfer. He tells the Defenders they must choose between going with him into the new universe or remaining behind to witness the end of the old one. The Surfer is dismayed at being laid low by a mere man and says they must destroy Nul and prevent Prester John from leaving the universe: a tall order. The Defenders feel sickened by the proximity of Nul, but it doesn't stop the Red She-Hulk from sprinting into battle.

Surfer remains in place, trying to commune with the silent guardian of the Concordance Engine. He can glean only that Prester John lost his "miracle" and with it his sanity. The other Defenders fight Nul, but he shrugs off attacks that would kill any other creature. Above them, Prester John's ark comes to life and bursts out of the mountain, bringing tons of rock down on the Defenders. They are just able to deflect the boulders away from themselves and onto the head of Nul.

The Surfer, realizing that Prester John's ship will destroy the universe just by firing its engines, leaves the Engine and his teammates to stop it. Back inside, Nul bursts forth from the rock, scattering the Defenders, and slams both fists into the Concordance Engine. The silent guardian is roused and turns over his hands to reveal a gleaming white omega on each palm.

Prester John's ship suddenly changes course. The Silver Surfer has seized it. Nul's fists have released a shining wave of energy from the Engine; as it washes over the Defenders, they are reclad in outfits from other versions of themselves. Namor is wearing his green briefs; Danny Rand is bare-chested in green trousers and a long sash; She-Hulk is in a new outfit that resembles Asgardian armor, and Doctor Strange is wearing the blue-masked costume of the Necromancer. Nul continues battering the machine with mindless violence.

The guardian puts a hand on Nul's shoulder and simply erases him -- from sight, from the page, from very existence.

As the Defenders try to make sense of this abrupt turn of events, Iron Fist wonders where the Surfer has gone. Their fifth member has led Prester John's ship away from Earth, infused it with the Power Cosmic, and set it on an unchangeable course into space, presumably for centuries, carrying John and his hapless New Men with it.

The Concordance Engine, unharmed, stands before the Defenders. Red She-Hulk wonders what to do next, but Doctor Strange has some ideas...

Retrieved from "https://heykidscomics.fandom.com/wiki/Defenders_Vol_4_3?oldid=1600268"
Community content is available under CC-BY-SA unless otherwise noted.