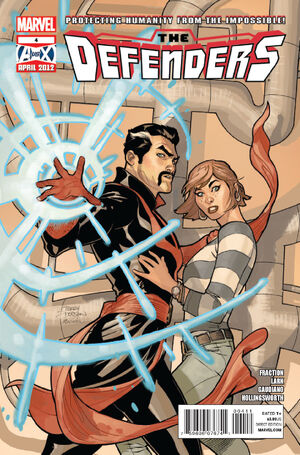 The Defenders have moved the Concordance Engine from its place under Mt. Wundagore to the upper room of Doctor Strange's Sanctum Sanctorum. The unnamed Prester who guards it is also there in his throne, uncommunicative and unresponsive. Strange has been searching his books for any mention of the Engine but finds nothing definite.

Wong ushers Iron Fist and the Red She-Hulk out so Strange can meditate on the Engine. Before he can begin, he is interrupted by Molly, the graduate student with whom he had an ill-advised one-night-stand. She needs to see the Liber Amsterdam, a book in Strange's library. Strange loans her the book without comment, but when he returns to meditation he finds his concentration broken by thoughts of women and his own loneliness. The Engine activates and delivers to him Martha, a lost love from Strange's student days.

A street magician notices Molly's book and stealthily slips a coin between its pages. Using the odd sigil on the coin, he astral projects into Molly's home and watches her until he learns that it was Strange who loaned her the book.

Strange and Martha spend a few days rekindling their romance, but eventually she asks him what had happened. He tells her that she married someone else, had a family, and then died of ovarian cancer. Shocked, she starts to leave over Strange's protests, only to be stopped when Molly comes to the door to return her borrowed book.

Martha finds Strange contemplating the Concordance Engine. He tells her (and the young magician, who can now send his astral projection into Strange's home) that he wished her back into his life, unknowingly using the Engine's power to change reality. He says he believes it is now his responsibility to keep others from wishing for worse.

That night, the young magician appears in Strange's bedroom. The older sorcerer's magic detects and binds him, but the younger man blackmails him with threats of revealing the Engine and Martha to the world. He demands the right to return the following night and have free run of Strange's library. As soon as he is gone, Strange and Martha flee to Molly and ask her to help them get Martha out of town.

When the young magician's remote projection appears again, he finds himself trapped in a jar. Strange shelves him next to hundreds of identical jars and walks away.

The following day he meets Molly and offers her the Liber Amsterdam in gratitude, but she refuses, saying she no longer wants anything to do with him. Strange, who can remember his heartbreak when the real Martha -- a grad student who was his advisor when he was a med student -- left him for another, muses that he knows how she feels.

Contemplating the Engine again, Strange receives a message from Namor. The Atlantean ruler has found an undersea wall bearing the distinct outline of a Concordance Engine.

• Why Does A Young-Gun Magician Have Strange In His Sights? • What Is The Concordance Engine?

Retrieved from "https://heykidscomics.fandom.com/wiki/Defenders_Vol_4_4?oldid=1421558"
Community content is available under CC-BY-SA unless otherwise noted.