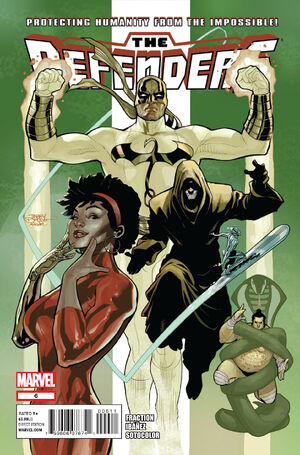 How is it possible that men and women as remarkable as Randall and his associates have been forgotten? This would be the equivalent of the world forgetting the Avengers, perhaps -- near inconceivable. Are they forgotten, or... hidden?

As Fat Cobra lies dying on Danny's doorstep, he gasps out "A man.." and goes into cardiac arrest. Danny uses the Iron Fist to save his life while Misty Knight calls an ambulance. Unfortunately, a quick survey by Danny reveals that the Immortal Weapons are indeed being murdered. Misty intuits that Danny has gotten involved in something dangerous, but he is almost literally tongue-tied when he tries to tell her about his adventures with the Defenders, and the Concordance Engine. She walks out in disgust.

Danny consults with Doctor Strange, who has also discovered that he cannot tell outsiders about the Engine. He tells Danny about his own misadventures -- calling Martha back into his life -- which makes Iron Fist wonder if he could use it to resurrect the Immortal Weapons. Strange replies that the Prester who guards the machine probably wouldn't allow it.

With the aid of the Silver Surfer, Danny searches his own library for references to the Concordance Engines. They find a series of accounts written by Ernst Erskine, one of Wendell Rand's teammates with a group called the Confederates of the Curious. Their interest is piqued by two tidbits in particular: that this group of heroes once met Captain Nemo on the Nautilus, and that they have disappeared almost completely from living memory.

Before they can ponder further, John Aman, the Prince of Orphans, arrives. He is dead-convinced of two things: that Danny and "his gang" are going to shut the Engines down and that he must be killed. Iron Fist tries to ask whether Aman murdered the other Immortal Weapons by mistake, but cannot get a clear answer before the Silver Surfer intervenes, inhaling Prince of Orphans' mist form and carries him off, depositing him in the caldera of an active volcano.

When the Surfer returns, Danny calls his attention to another passage in his book of the Confederates of the Curious. They found an Engine in Z'Gambo, guarded by John Aman, Captain Nemo, Leonard McKenzie, Princess Fen, and others; moreover, they also found evidence of more Engines all over the world. Danny resolves to shut the Engines down.

• WHY did the world forget about the Confederates of the Curious? • HOW does the Concordance Engine tie all these threads together?

Retrieved from "https://heykidscomics.fandom.com/wiki/Defenders_Vol_4_6?oldid=1421560"
Community content is available under CC-BY-SA unless otherwise noted.