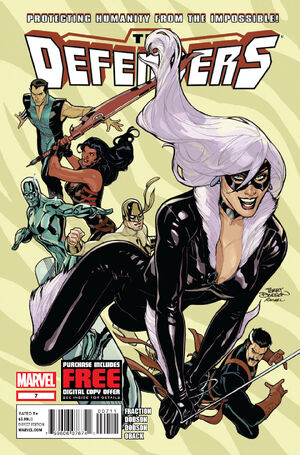 Come and get me.

The Council of Antiquarians -- a group of wealthy and eccentric collectors -- are giving Black Cat a trial run. Her immediate task is to steal a glove-like artifact called a Satan Claw. After a tedious period of infiltration, she has her chance to swipe the Claw; the Council, as a test for her, triggers an alarm and calls in security. She makes her escape out a window. While in free-fall, she manages to activate the Claw and teleports back to her employers, who inform her that she can keep it, since she's proven to be the kind of thief they need. And if she can steal a certain Brass Frog from the African micronation of Z'Gambo, they will give her anything she wants...

Meanwhile, the Defenders (Doctor Strange, Silver Surfer, the Red She-Hulk, and Iron Fist) arrive in the neighboring state of Wakanda to meet with T'Challa, who now shares the Black Panther name and costume with his sister Princess Shuri. Iron Fist is eager to pursue the connection between Z'Gambo, the Concordance Engines, and Prince of Orphans -- an Immortal Weapon who may have been killing the others to protect an Engine. T'Challa and Shuri inform them that Wakanda and Z'Gambo have a ceasefire agreement because of a long and painful history of war between the two nations, and that no one crosses the border from one to the other. They invite the Defenders (minus Betty) to a dreamscape where they can consult with the spirits of the former Panthers. However, as soon as T'Challa mentions John Aman's name, the man himself appears and attacks him with poisonous mist. Doctor Strange struggles to save his life, while T'Challa tells Shuri to avenge him. Shuri says that Z'Gambo and Wakanda are now at war.

Black Cat is also on her way to infiltrate Z'Gambo from a modified air-ship in low-Earth orbit. As she falls from 83,000 feet, she muses that it doesn't sound too difficult. But when we see Z'Gambo -- nothing but bones for miles in all directions, and Prince of Orphans himself holding the Brass Frog she is coming to steal -- it seems she may be very wrong indeed.

• The Black Cat takes the job of a lifetime. The reward? Anything she desires!
• John Aman, the Prince of Orphans, readies to defend his secret with his life!

Retrieved from "https://heykidscomics.fandom.com/wiki/Defenders_Vol_4_7?oldid=1421561"
Community content is available under CC-BY-SA unless otherwise noted.