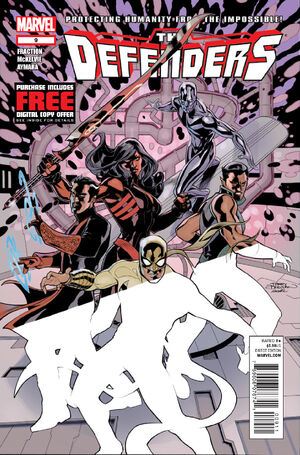 This isn't the world we're used to. Same but different, in its ways, and in both, you're the kind of person who knows about secrets. And what's more secret than a secret that can hide itself?

The story opens in an alternate-universe 1968, with Red She-Hulk and Danny Rand acting as employees of The Hydra Club, a swanky yet somewhat shady New York City nightclub being patronized that night by the Nick Fury of that dimension. He is with Agent Pussycat, a glamorous blonde agent of HYDRA. Danny is bartending and Betty is posing as a very large, bright red cocktail waitress.

As Nick refuses a shot of whiskey from a man resembling Hitler, he touches Betty's shoulder, causing the world to go slightly 'off.' Nick Fury and Agent Pussycat go off elsewhere.

In a subway station, Doctor Strange, the Silver Surfer, and the Black Cat are waiting by a Concordance Engine for the others to return with Fury. Impatient, Black Cat goes out to bring him in personally. She subdues him with ether moments after he and a team of Life Model Decoys foil Agent Pussycat's plot to murder him. He awakens in the Defenders' custody. Strange explains that they needed his help but were unable to contact him directly. Though seeming a bit clouded in his thoughts, Fury takes most of this in stride.

The Surfer detects HYDRA tracer perfume on Nick's collar, and between that and a SHIELD tracker hidden in Fury's tooth, the subway station is abruptly filled with SHIELD and HYDRA agents. The Silver Surfer communicates to the guardian Prester that the Concordance Engine is endangered and asks him to send them home. Elsewhere in the melee, Fury confronts and corners the man who resembles Hitler, and fires a shot just as the Engine whisks him out of that dimension with the Defenders.

They arrive in a giant world, or perhaps they are simply very small.

• The Defenders…. lost in infinite space-time without a map! • What alternate universe will they find first? And who is waiting for them?

Retrieved from "https://heykidscomics.fandom.com/wiki/Defenders_Vol_4_9?oldid=1421563"
Community content is available under CC-BY-SA unless otherwise noted.