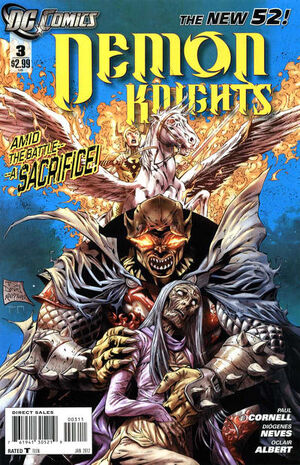 Under siege and under fire – quite literally – the hastily assembled Demon Knights find that the villagers they're trying to protect are ready to turn on them… and that they're locked behind embattled walls with a demon whose very touch can kill! And if the only human Etrigan gives half a damn about dies of her wounds, then Hell help anyone around him…

Retrieved from "https://heykidscomics.fandom.com/wiki/Demon_Knights_Vol_1_3?oldid=1660617"
Community content is available under CC-BY-SA unless otherwise noted.