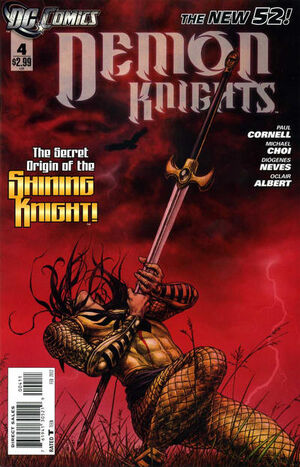 Appearing in "Merlin Watches the Storm"Edit

It wasn't a coincidence that the Shining Knight found herself in Little Spring as the Horde massed at the village gates. She's on a quest, and has been all her long life – whether she's known it or not! Now, a powerful vision will reveal to her the true stakes of the battle for Little Spring and pull back the curtain on one of the biggest secrets in the DC Universe! Don't miss "Merlin Watches The Storm," featuring guest art by the sensational Mike Choi (X-Force)! And yes, "storm" is a hint.

Retrieved from "https://heykidscomics.fandom.com/wiki/Demon_Knights_Vol_1_4?oldid=1660618"
Community content is available under CC-BY-SA unless otherwise noted.