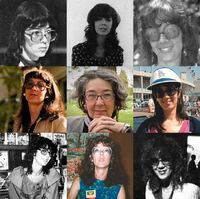 Loubert and Sim met in 1976[2] and were married from October 6, 1978 to August 20, 1983.[3] The barbarian aardvark Cerebus was sketched initially by Sim as a mascot to accompany Loubert's proposed fanzine, Cerberus, a title which Deni famously misspelled. (The fanzine went unpublished.)[2]

Aardvark-Vanaheim, managed by Loubert, began publishing other comics besides Cerebus, such as William Messner-Loebs' Journey and Bob Burden's Flaming Carrot. After Sim and Loubert's 1984 separation, Loubert started Renegade Press, which assumed publishing duties for all non-Cerebus Aardvark-Vanaheim titles. Renegade Press operated from 1984 to 1989.

Loubert's brother is Michael Loubert,[2] who designed the original map used as the basis of Cerebus's world, Estarcion. Michael Loubert also wrote "The Aardvarkian Age" columns that appeared in early issues of Cerebus.

In 1987, Loubert was presented with an Inkpot Award. In 2010, she was inducted into the Canadian Comic Book Creator Hall of Fame.

In 1987, Loubert accepted an Inkpot Award on Steve Ditko's behalf (Renegade had published Ditko's World in 1986). Ditko refused the award, phoning Loubert to say, "Awards bleed the artist and make us compete against each other. They are the most horrible things in the world. How dare you accept this on my behalf." At Ditko's behest, Loubert returned the award to the San Diego Comic-Con organizers.[4]

Retrieved from "https://heykidscomics.fandom.com/wiki/Deni_Loubert?oldid=1565064"
Community content is available under CC-BY-SA unless otherwise noted.