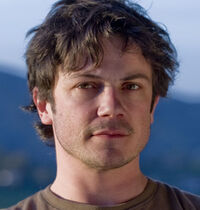 Lives in London with his partner Charlotte and their son Eolan.

Specialises in fully-painted art. Painted video game covers for Virgin Games 1989-90, Judge Dredd and Sláine for 2000AD 1991-1997, and part of the Batman-Judge Dredd crossover "The Ultimate Riddle" in 1995, as well as covers for 2000AD the Judge Dredd Megazine and Sonic the Comic. For Marvel, contributed to Dinosaurs, A Celebration (Epic Comics) in 1992, and painted all four issues of Digitek (Marvel UK) in 1992. Has been a movie concept designer since 1997, working on films including Star Wars: Attack of the Clones, V For Vendetta, Batman Begins, Charlie and the Chocolate Factory, Beowulf, the Harry Potter series, and Tim Burton's Alice in Wonderland.