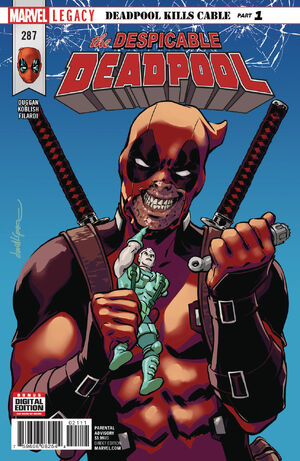 On a rainy night, Cable is laying in an alley, bleeding badly. His A.I., Belle, injects him with a strong dose of adrenaline just in time for him to fight back against his opponent: a chainsaw-armed Deadpool who's out to kill him. After a brawl, Cable evokes a futuristic weapon that puts Deadpool into a stasis, while the future son of Scott Summers can find a hospital to recover.

As soon as the stasis effect fades out, Deadpool goes after Cable, threatening random citizens to reveal where he's hiding. As he gets into the closest hospital, he explains that the mission to kill Cable was assigned to him by Cable's clone, Stryfe, as the first in a series of killings he needs to operate for him.

After shooting an innocent in the legs, Deadpool finds Cable and they continue their fight in the hospital, with Nathan asking Wade why is he doing this. The scuffle goes on in an MRI room, and Deadpool immediately activates the machine to attach Cable's metal arm to its magnetic surface. As Cable is unable to move, Deadpool draws his carbon-fiber katana, ready to end his old friend's life. First he cuts Cable's metallic arm off, then, as he's about to behead him, time stops and the Time Variance Authority, a sort of police from the future, comes to arrest Cable, mistaking him for Stryfe and effectively saving his life.

Deadpool gets a call from Stryfe himself, who tells him he has everything he needs to continue his chase: Cable's metallic arm, in fact, contains the A.I. capable of travelling through time.

As Belle refuses to aid him, Deadpool attaches to Cable's arm a logic bomb the Avengers designed to incapacitate Ultron should he return: then, he cuts his own arm out, replacing it with Cable's. Belle is overcome by Deadpool's own A.I. and together they get ready to chase their victim in the future.

Deadpool’s going back to his vile beginnings as a mercenary and wanted killer. No more being a hero. No more X-Men. No more Avengers. And if he wants to break bad again, what’s more despicable than killing your best friend? Cable better get ready because his old friend Wade has him in the crosshairs. PLUS: Includes 3 bonus MARVEL PRIMER PAGES! Story by Robbie Thompson and a TBA artist!

Retrieved from "https://heykidscomics.fandom.com/wiki/Despicable_Deadpool_Vol_1_287?oldid=1661129"
Community content is available under CC-BY-SA unless otherwise noted.