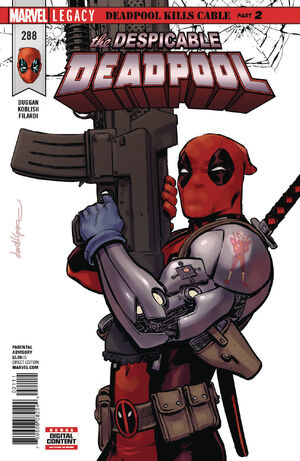 ♫ Time cops, time cops, whatcha gonna do when Deadpool comes for you? ♫

In a distant future, Cable is held prisoner by the Time Variance Authority, who think he's actually his evil clone, Stryfe. He tries to explain to his cell guard, Officer Salcido, that they shouldn't have left Deadpool with his arm, because now he'll be able to travel through time and find them. He also wants to make a phone call to someone before Deadpool arrives. Cable proceeds to explain how Deadpool is going to be able to locate their time and place and massacre every member of the Time Variance Authority: thanks to his past as an Avenger, he's got access to data about past TVA encounters, so he'll travel back to that moment in time and interrogate an agent to know what he needs. What Cable says is exactly what happened, and Salcido realizes it as he hears shots from a room nearby.

Deadpool uses the severed head of an Officer to pass through a retinal scanner and then proceeds to massacre numerous others. As Salcido watches them die through a surveillance screen, he finally grants Cable his phone call. The man who answers the call is none other than an older version of Cable himself, to whom he asks how to stop Deadpool this time around. The old man replies by saying that Deadpool lost everything and it's exceedingly hard to beat a man who lost everything. The best thing to do is find a good way to lose. Salcido has by now understood the situation and the danger he's in, so he hands Cable a gun and they run together.

As Deadpool slices through the Officers, he thinks that all this was probably planned by Stryfe himself: after all he wants Deadpool to kill Cable and the TVA to think they have apprehended Stryfe, so he must have dropped a dime on Cable himself. Deadpool doesn't care for any of that, though, as he just wants all this to end. Deadpool reaches Cable and carelessly kills Salcido with his katana.

With Cable on his knees, Deadpool is finally ready to shoot him in the head, but apparently Summers has a trick down his sleeve: there's a code he can pronounce to regain control over the technology in his prosthetic arm. He speaks the magic words (they are literally "the magic words") and Deadpool starts punching himself with Cable's arm. Cable's A.I., Belle, resurfaces and deletes Deadpool's; then, Cable rips his own arm out of Deadpool's shoulder, with a lot of blood spilled in the process. As Cable points a machine gun at Deadpool's face, he tells him that when he'll wake up he'll answer Cable's questions about Stryfe: should Cable not like the answers, he'll kill him for good this time. Deadpool is confused: he doesn't feel tired or anything, so there's no reason for him to sleep. As an answer, Cable riddles his head with bullets.

Deadpool’s going back to his vile beginnings as a mercenary and wanted killer. No more being a hero. No more X-Men. No more Avengers. And if he wants to break bad again, what’s more despicable than killing your best friend? Cable better get ready because his old friend Wade has him in the crosshairs.

Retrieved from "https://heykidscomics.fandom.com/wiki/Despicable_Deadpool_Vol_1_288?oldid=1661134"
Community content is available under CC-BY-SA unless otherwise noted.