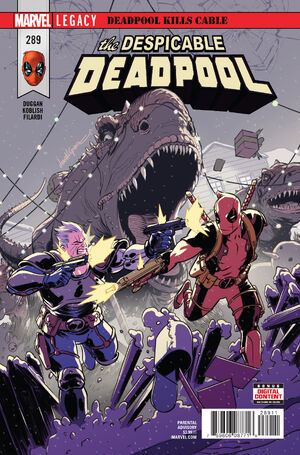 So going back to face him last Christmas seems like a bad plan.

Appearing in "Deadpool Kills Cable - Part Three: It Was Good While It Lasted"Edit

• Yeah – Deadpool’s still on a mission to bump off his best buddy Cable... but that doesn’t mean he doesn’t have time to fight some DINOSAURS.

• Because who wouldn’t want to punch a dinosaur?

Retrieved from "https://heykidscomics.fandom.com/wiki/Despicable_Deadpool_Vol_1_289?oldid=1661140"
Community content is available under CC-BY-SA unless otherwise noted.