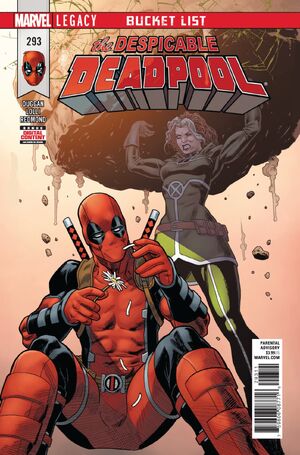 Well. That shut me up. You're right, of course. And I would probably even date Gambit, but I wouldn't want to make it weird between you and me.

Appearing in "Bucket List - Part Two: This Could Be The End Of A Beatiful Friendship"Edit

Deadpool has a lot of unfinished business in his inbox, and he’s determined to take care of it before… any sort of bad and permanent-ish thing happens to him. Revenge on Stevil Rogers? Settling things with Rogue? Oh, and doesn’t he still need to kill a few more folks? It’s time to get Wade’s affairs in order. You know, just in case…

Retrieved from "https://heykidscomics.fandom.com/wiki/Despicable_Deadpool_Vol_1_293?oldid=1661154"
Community content is available under CC-BY-SA unless otherwise noted.