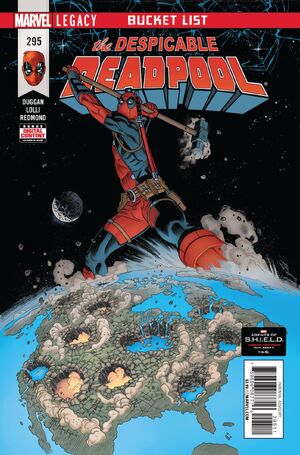 My name is Wade Wilson, and I owe you an apology.

Wade continues checking off his BUCKET LIST! Deadpool continues to wrap up his remaining business, you know, just in case. This time… Madcap is back to ruin his life! Then — is Deadpool really going to kill Apocalypse? That’s his next target… sort of…

Retrieved from "https://heykidscomics.fandom.com/wiki/Despicable_Deadpool_Vol_1_295?oldid=1661156"
Community content is available under CC-BY-SA unless otherwise noted.