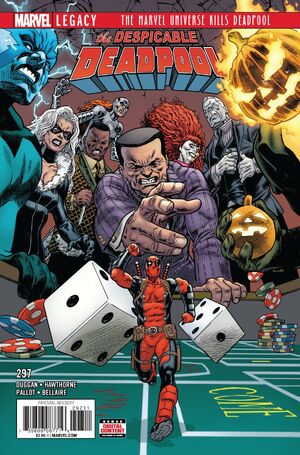 The names's Pool... Deadpool. I'm here to gamble too, except I hate leaving anything to chance so I'm going to just take 20 million out of the cage and gamble that I don't have to kill anybody. And if I have to kill anybody -- I'm killing everybody.

• Wade is no stranger to gambling with his life… but this time the odds are longer than the bathroom line at a burrito joint with a broken freezer.

• What do you do when half the world wants you dead?

• Start pissing off the OTHER half!

Retrieved from "https://heykidscomics.fandom.com/wiki/Despicable_Deadpool_Vol_1_297?oldid=1661162"
Community content is available under CC-BY-SA unless otherwise noted.