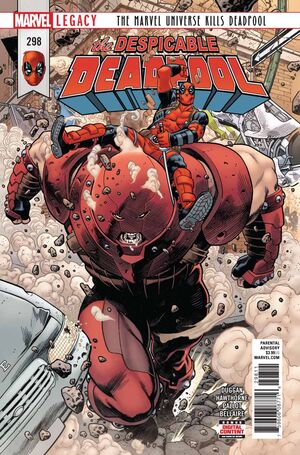 I was all for it until I found out you were all for it. Get some help, Wade.

You like villains? Oh, we got villains. With a twenty-million-dollar bounty on Deadpool’s head, every no-good scumbag in the game is gonna be gunning for him. And after the year he’s had? That’s just the way he wants it.

Retrieved from "https://heykidscomics.fandom.com/wiki/Despicable_Deadpool_Vol_1_298?oldid=1661165"
Community content is available under CC-BY-SA unless otherwise noted.