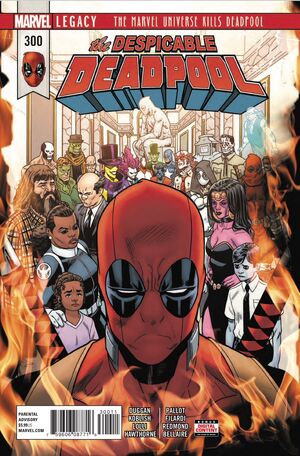 Zzz. Avenger... hungry... twenty bucks... that's... that's not how you Deadpool. I'll show you how to Deadpool! I wanna Fresh Start, too.

Every bad decision, every betrayal, every fart joke — they’ve all come back to haunt Deadpool. He’s gone from criminal to outcast to celebrity and back to criminal, and as Captain America leads the biggest heroes of the Marvel Universe to take him down, Wade is forced to be his most despicable self ONE LAST TIME…

For over five years and more than a hundred issues Gerry Duggan has been putting words into the Mouth of the Merc with same… but all that ends in this TRIPLE-sized issue with art by longtime Deadpool collaborators Scott Koblish, Matteo Lolli and Mike Hawthorne! It’s one last love letter to the character we love to hurt. Sorry, Wade! This one’s gonna sting.

Retrieved from "https://heykidscomics.fandom.com/wiki/Despicable_Deadpool_Vol_1_300?oldid=1661167"
Community content is available under CC-BY-SA unless otherwise noted.