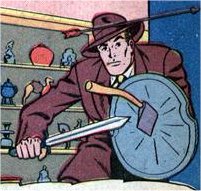 Destiny was a crime fighter who, after he got a "Queer dizziness," gained the ability to be magically moved to the scene of a crime. He begins his story as a homeless man who went to a magic show in hopes of winning prize money so he could eat. Prof. Seezall Nozal, the star performer, tried to read his mind, and after doing so, he stopped the show. He called the man for a private consultation in his dressing room and explained that he had a great destiny and a power that could be used for good or evil. The homeless man thought this was ridiculous and decided to return to his seat, but when he tried to clear his mind, as the Professor had suggested, he was whisked away to a crime scene. This crime was the murder of fellow hero, 711, who had tracked down a criminal named Oscar Jones to his lair only to be shot and killed by Jones. Thanks to his power, Destiny witnessed the murder and made it his mission to bring in Oscar Jones. He succeeded and continued to use his power to fight crime wherever he found it.

Retrieved from "https://heykidscomics.fandom.com/wiki/Destiny_(Quality)?oldid=216733"
Community content is available under CC-BY-SA unless otherwise noted.