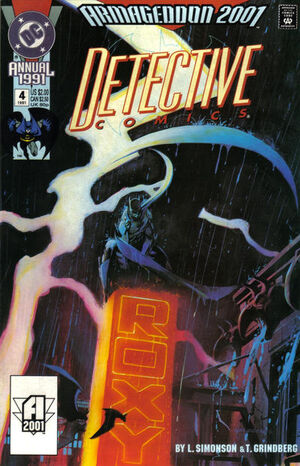 In the year, 2001, Batman fought Ra's al Ghul to save the world from a virus. He succeeded but ended up crippled. Distraught from the injuries, he declared that Batman is dead. For weeks, crime skyrocketed as the mob took over Gotham City. They even managed to get Commissioner Gordon to retire. Tim Drake realized that Gotham needed a Batman so he put on the cowl.

Unfortunately, he was killed by some robbers. Bruce heard what happened and decided to avenge Tim's death and become Batman once more using prosthetics to help him move again. He went through all of the criminals and the corrupt politicians until he found out that Ra's men were responsible for Tim's death. So, he went back to the place where he nearly died to learn that Ra's had not been revived by the Lazarus Pit and that Talia was the one who ordered Tim to be killed thinking he was Bruce.

After a long fight, Bruce managed to defeat the men but made his injuries worse. His body became so strained and broken that not even the prosthetics will help him walk again. Talia revealed that her plan was to expose Bruce to the Lazarus Pits and make him Ra's heir like her father would have wanted. Bruce used the last of his strength to detonate a bomb hidden deep in his armor and used it to destroy the Lazarus Pit and took Talia long with it.

Retrieved from "https://heykidscomics.fandom.com/wiki/Detective_Comics_Annual_Vol_1_4?oldid=1422426"
Community content is available under CC-BY-SA unless otherwise noted.