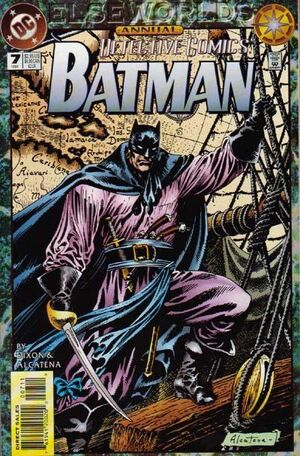 And if his words are true and we might plunder the stronghold of the grand Captain Leatherwing himself... then the riches of a hundred galleons will be mine. And a tide of blood will carry my enemies before me.

The privateer Captain Leatherwing and his trusty first mate Alfredo board a Spanish ship known as the Santa Corazon. Leatherwing captures the crew and rescues the island slave girl Princess Quext'chala. Sailing back towards the Cayman Islands, Leatherwing's vessel the Flying Fox stops at Kingston Harbor. A street urchin known as Robin Redblade stows away on Leatherwing's ship.

The Flying Fox brings Princess Quext'chala back to her father King Hapa. To show his gratitude, Hapa offers Leatherwing his daughter's hand in marriage. Leatherwing accidentally accepts a ceremonial marriage bracelet before realizing the full ramifications of receiving such a gift. Leatherwing and Alfredo board the Flying Fox and sail off. Leatherwing discovers Robin Redblade's presence on his ship and provides him with food and a cabin.

Meanwhile, the Laughing Man finds a vivacious female pirate named Capitan Felina. The two conspire with one another to find Bat's Cay. The Laughing Man pretends to force Felina off the plank into a sea of hungry sharks. As the Flying Fox approaches, Leatherwing sees what is taking place and dives into the water to save Felina. He brings her aboard his ship and becomes immediately infatuated with her. Felina is discouraged however as Alfredo indicates that his captain only recently took a bride. With Felina on board, Leatherwing sails for Bat's Cay.

Retrieved from "https://heykidscomics.fandom.com/wiki/Detective_Comics_Annual_Vol_1_7?oldid=1489587"
Community content is available under CC-BY-SA unless otherwise noted.