Start a Wiki
Part of the 'Year One' event 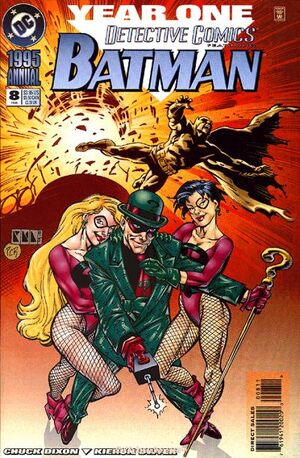 Appearing in "Questions Multiply the Mystery"Edit

Synopsis for "Questions Multiply the Mystery"Edit

The Riddler, occupying an observation room at Arkham Asylum, expresses his annoyance with the inept psychiatrists' repeated attempts to pierce his psyche, and decides to give them what they want: the story of his life, how he became a criminal, and why he repeatedly opposes Batman.

A brief peek into Edward's past reveals that he was a "nobody" as a child, ignored by even the playground bullies at his school. Hungry for attention (especially with ignorant, unloving parents), the young Edward began his "career" in the sixth grade by cheating at a solve-the-puzzle contest - by sneaking into the school the night before the contest, he was able to practice solving said puzzle, and easily solved it within a minute when the contest came. Edward's fame proved to be fleeting, however, and the young boy realized that to keep the attention he so craved, he had to turn to his true talent: cheating.

After leaving school, Edward became a deliveryman, a profession which he equates to being in "Hell".

Retrieved from "https://heykidscomics.fandom.com/wiki/Detective_Comics_Annual_Vol_1_8?oldid=1687538"
Community content is available under CC-BY-SA unless otherwise noted.