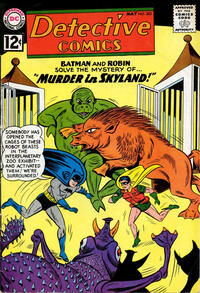 Appearing in "Murder in Skyland!"Edit

Synopsis for "Murder in Skyland!"Edit

Batman and Robin try to solve the murder of the owner of a space-themed amusement park.

When the Martian Manhunter has to save person after person from disasters in Middletown, he is baffled as to the reason for the events, until he nabs two crooks attacking a warehouse manager. The crooks tell him that their boss has been seeking out J’onn J’onzz’s Earth identity by eliminating suspects from a list, and they flatly tell him that the only person left whom he could be is John Jones. J’onzz remembers that he saved a plane which he was aboard recently when its engines conked out, and the gang boss and a confederate happened to be on a passing plane and saw him, deducing he had to be one of the passengers on the plane. J’onzz throws off the gangster’s suspicions by using his powers to make it seem he is saving a plane that John Jones is aboard. Then he captures the gang boss and his cronies. Later, Captain Harding tells Jones about two crooks in jail who are insisting that Jones is the Martian Manhunter, but the rescue incident has convinced Harding that the two cannot be one and the same.