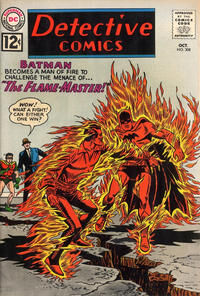 Pete Dale, a crook, gains the power of the four elements (fire, earth, air, and water) from an Indian shaman’s relics. To combat him, Batman subjects himself to the same magic and gains the same power.

John Jones is assigned to take back an ancient ring and jewel box to the medaeval European nation of Lavonia after the objects are recovered in a raid on a Middletown fence. Once there, Jones is attacked by bandits and becomes the Martian Manhunter and repels them. But he is struck by a strange ray from the ring which inhibits him from turning into John Jones again. The ring is recovered by the evil Baron Voto, who wishes to conquer Lavonia. The Manhunter battles Voto, is struck by the ring’s beam again (which cancels the effects of the first blast), and defeats the usurper.

Retrieved from "https://heykidscomics.fandom.com/wiki/Detective_Comics_Vol_1_308?oldid=1378384"
Community content is available under CC-BY-SA unless otherwise noted.