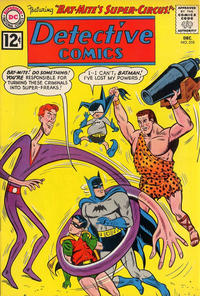 Bat-Mite comes to Earth and gives three crooks super-powers to make them more challenging to Batman and Robin. But a bump on the head blocks Bat-Mite from using his powers against the crooks, and the three opponents may be more than the heroes can handle.

Appearing in "The Miniature Manhunter"Edit

Synopsis for "The Miniature Manhunter"Edit

After J’onn J’onzz is shrunk by a size-changing machine invented by criminal scientist Victor Vance, he uses his small size to his advantage in battling and defeating Vance. Then he dupes Vance into restoring his normal height, and reduces Vance temporarily to tiny size in order to take him to the police.

Retrieved from "https://heykidscomics.fandom.com/wiki/Detective_Comics_Vol_1_310?oldid=1378386"
Community content is available under CC-BY-SA unless otherwise noted.